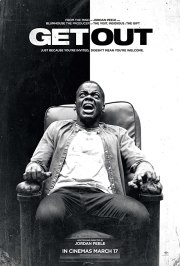 With it will come several ploys from marginalized groups of people and artistic forms of protest. There have been anti-Trump songs, rallies, and several other catalysts for expressing dissatisfaction with the current state of the US Government. Jordan Peele, one-half of the dynamic comedy duo Key & Peele, avoids this and addresses politics at a more personal level.

With his debut directorial feature, Get Out, Peele showcases how so-called “white allies” make Black people feel uncomfortable and awkward in conversation and certain environments.

Peele puts the audience in the shoes of Chris (Daniel Kaluuya), a young Black man traveling with his White girlfriend Rose (Allison Williams) to her parents house in a quiet suburb. By putting the perspective on Chris, Peele reveals the subtle discrimination a man like Chris faces in his daily life.

When Chris arrives at Rose’s childhood home, things already appear to be a little strange. The craziness continues throughout the film, spiraling into what becomes a unique comedy-thriller so original and pivotal to the current state of the country.

The film speaks truth in claiming that conversational efforts like ignorant name-dropping (“I’m a fan of Tiger Woods”) and hacktivism (“I voted for Obama, and would do it again!”) only provide further discomfort. This is shown throughout several scenes. Peele uses satire to convey the all-too-real struggle faced by black people across the nation.

Whether it be issues of police brutality, hesitance to be genuine in conversation, or overt mistreatment, Peele incorporated it into the film. His script and sharp direction suggest he’s been creating films for years, making his debut feature all the more powerful and impressive.

Backing Peele’s stellar work are the performances of the entire cast. Daniel Kaluuya, probably most well-known for his work in Black Mirror, says a lot with a little dialogue. His mannerisms, movements, and body language play a pivotal role in the tone of each scene.

Allison Williams surprisingly branches out from her Girls archetype, portraying a multi-faceted and unpredictable character. The supporting cast is nothing short of brilliant, with Catherine Keener, Bradley Whitner, and Lil Res Howery delivering sharp performances as well. The acting, writing, and directing are all executed meticulously and make the overall message of the film clear and biting.

Get Out is a genre hybrid film that gets more unpredictable with each scene. The cast is phenomenal, but the real creative genius at hand is Jordan Peele. His ability to integrate real social issues of modern society within a heightened or alternate reality is nothing short of astounding.