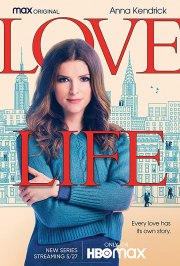 As the concept of television continues to rapidly evolve during unprecedented times, an increased saturation of streaming services has flooded smart TVs across the globe. The latest new addition is Warner’s HBO Max, an apparent reboot of HBO Go that includes a few new additions in the Warner Media world and some partnerships for exclusive streaming rights.

Like many of the newly launched services, HBO Max attempts to spark excitement with a flagship title in the Anna Kendrick starring Love Life, a uniquely structured serialized story of the rushes and pitfalls of falling in and out of love over the course of a lifetime.

The service’s decision to use a show with such a clearly specific audience built in is surprising, and the series doesn’t come close to the prestige of HBO’s usual offerings in the genre (i.e., Sex and the City, Insecure, Enlightened). It has its moments, but for the most part, Love Life would’ve served better as a quiet addition to HBO Max’s content library further down the road.

The series revolves around Darby Carter. From California, Carter is navigating her young life in a shoebox apartment in New York City with several of her closest friends. At the beginning of the series, Carter is unsure of herself, struggling with her career, and longing for love. What follows is a supercut of her best and worst moments in and out of love, each entry unwrapping the facets of how the central character approaches love and the reasons behind it.

Largely inspired by romantic comedies, Love Life often feels like a serialized version of a film like (500) Days of Summer. Each episode is named for a person in Carter’s life that she loves. Its an interesting twist on the single character focus series that have been popularized in recent memory (i.e., Orange is the New Black, Dear White People). These characters are explored through Carter’s perspective, and each adds a scar and opportunity for growth for the character.

By the season’s halfway point, the amount of lovers, however spread out within the timeline of the show, leaves the viewer exasperated. Its not until the series decides to explore other avenues of why Carter is the way she is when things get truly interesting.

One of the strongest episodes of the run is “Luke Ducharme.” In the episode, Carter attends a therapy session in hopes of fixing her marriage to husband Magnus Lund. What follows is an exploration of her first romantic experience and insight into her own family’s dynamic.

Structurally, the episode is different and more interesting than the usual by-the-numbers meet cutes and exchanges of niceties. This hot streak continues with the episode “Claudia Hoffman,” a study on the relationship between Carter and her mother.

The dialogue shared throughout the episode is perhaps the most poignant of the series. It provides insight into how alone Carter’s mother feels in entering the second act of her life. Likewise, the episode reveals Carter’s own attitudes towards her mother and how undervalued she feels. Its one of the few relationships that doesn’t feel artificially constructed by the series’ creator and writers.

Closing in on the finale, the series quickly reverts back to its safety net of classic Hollywood romance narratives. With an unexpected pregnancy and a sudden friend wedding, Carter’s life quickly falls in to place for the written in the stars happy ending.

In its entirety, Love Life is soaked in the safety of familiarity.

From the mess of a best friend ruining a bachelorette party to dealing with narcissistic egotistical men, the themes are tired and lived in. When the series takes a different approach to studying the central character and her familial background is when things truly shines.

Though it has its moments, Love Life lacks the romance it identifies itself with.