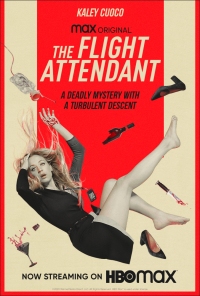 Imagine this. Penny from The Big Bang Theory trades the IKEA furnished rooms of Pasadena for worldly travel, foul mouthed behavior, and even more alcohol? Who wouldn’t book a flight?

With HBO Max as the airline and Chris Bohjalian’s novel The Flight Attendant as the destination, Kaley Cuoco sheds her sitcom setting for a non stop comedy thriller about an alcoholic flight attendant, Cassie, as she tangles herself up in a murder mystery.

As Cassie travels to Bangkok, she meets passenger Alex Sokolov, a mysterious businessman with whom she quickly starts a heavy flirtation. When Cassie joins Sokolov for a night out and later spends the night with him in his hotel, she wakes from a blackout to find his dead body beside her in bed. Ill equipped to deal with the fallout of the probable murder, Cassie spirals into a fit of very poor decisions, inciting a thriller that the titular heroine must maneuver herself through.

What results is a cocktail of noir that is as funny as it is exciting. Never taking itself too seriously like those around Cassie, the show is an escapist delight for fans of the Cuoco and the genre.

The Flight Attendant wins biggest when it utilizes Cassie’s perspective. In placing viewers in the shoes of someone who is so difficult to take seriously or entirely believe as an indirect narrator, the series’ tone is immediately set as comedic leaning. Thus, the outlandish fallacies are easily digested. A definite genre piece, the series inspires audience interest as it briskly moves through the journey of Cassie and her growingly concerned community of friends and family.

As she does begin to unravel toward the final episodes, though, so does the series. Up to this point, the series was granted enough suspension of disbelief because of compelling characters and intriguing mystery. When the payoffs begin to transact, though, viewers may be more inclined to shrug than sit and stare with gaping mouths. That said, the personal evolution Cassie endures is again interesting enough to watch as the series’ first season comes to a close.

What’s so great about the series is Cuoco herself. Offering fans of the actress similar personal traits as terrain, Cuoco proves the depth of her abilities as an actress by easing into more dramatically inclined work. Her most layered character yet, Cassie’s backstory and journey as it unravels across the 8 episodes is never the weak point in the series.

Where the airline takes her next? Well, the sky’s the limit.